“1000 people in traditional costumes in one place” 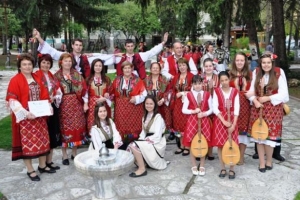 There is certain code in the ornaments of the Bulgarian costumes which in the past carried information about the family origin, the region of the country – the clothing always had its own message.

Traditional costumes in Razlog are preserved and passed on from generation to generation. Costumes with 100 years of history are preserved in some homes in Razlog. All year round master tailors create new costumes; their greatest joy is to recognize their creation when people wear it in the big ‘horo’ (traditional Bulgarian dance) that usually takes place in the center of the town.

During the centuries Razlog has preserved its traditions and customs that are revived from the people dresses in traditional costumes, passed on from generation to generation and carefully preserved through the years.