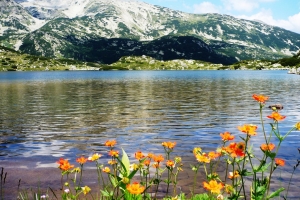 Popovo Lake is the largest of the eleven Popovi Lakes. The lake and the surrounding area is one of the most popular places for hiking in the Pirin.

Popovo Lake (2234 m above sea level) is the absolute leader among the lakes of Pirin - the largest one (with area of 12.4 ha), the deepest (29.5 m in its southwestern part) and the widest (336 m) in Pirin Mountain. It gathers its waters from the heavy rains, from the melting snow that stays till late summer in the foothills of the surrounding peaks, and from two flowing brooks whose well-shaped deltas flow into its southern part. The water volume is estimated at 1.27 million m³. The steep slopes of 5 peaks rise around the lake - Sivria, Djano, Kralev dvor, Momin dvor and Djengal (the Fairy peak).

The vast Popovo Lake resembles a small sea amongst the impressive peaks. With its clear waters and colorful coast - at some places low, at some places steep, covered with fragrant meadows, dwarf pines and amazing rock figures, it attracts hundreds of nature lovers from around the world.

Popovo Lake is an hour and a half trekking from Bezbog hut. From the northeastern end of Popovo Lake its waters flow to the six Ribni Popovi lakes (Fish lakes).The lakes give rise to Retizhe River which flows in Mesta River near Momina Klisura.
The shape of Popovo Lake is like an irregular pentagon. In the middle of the lake is the small round island (35-30 m) covered with dwarf pines,called ‘Kalimyavkta’.

Samodivski Lakes are located between Djengal and Momin dvor - a picturesque group of three small lakes. There is a story about it: long time ago around them lived the most beautiful daughter of god Perun, and the palace of her brother Djengal was on the nearby peak, called Samodivski peak today (The Fairy peak). The evil god Bes felt in love with the sister of Dzhengal and thought about kidnapping her. Djengal get angry, gathered his gods-brothers and they covered Bes with stones on the top which today is named after Bes (Bezbog – Bes-bog; ‘bog’ means ‘God’). Bezbog is located northeast from Popovski circus.

The legend of Popovo Lake
Until 1942 the lake was named Papazgyol, which is a literal translation of its current name in Turkish. The name of the lake is connected with at least two legends. According to the more popular one it is called so because a priest jump in it on purpose – he was sad that his daughter was abducted by the Turks.When the priest sank his hat floated on the surface and formed an island in the middle of the lake named after his name. According to another legend, after the Christening of Bulgarians in the 9th century,one priest went on the top of Pirin mountain to send away the Slavic pagan god Perum. He found him, but Perun furious from his impudence threw him into the lake to drown. Again his hat floated on the surface and became an island.