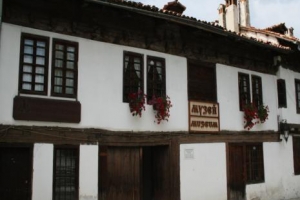 Razlog is proud with the preserved old houses from the architectural type “razlojko-chepinska house”. Most of them are situated on “Macedonia” square and on “Vazrajdane” street. The most famous are Parapunova house, which is turned into a Historical museum, and Kipreva house. The historical museum in Razlog is settled in the home of Nikola Parapunov, on “15th September 1903” square near the downtown of Razlog.

The museum is part of a few renaissance houses that are declared monuments of architecture. The building is from the type “razlojko-chepinska” house “brother” type from the end of 19th century. This type of house is considered to be the successor to the so called “symmetrical houses” which have appeared for the first time in Plovdiv in the second half of the same century. It was burned in the rebellion in 1903 and built again following the old plans in 1905.

The museum holds more than 5000 exponents from different epochs. The museum has valuable collections of old weapons and books, traditional local clothing and works of local craftsmen. The rich photo gallery and documents from XIX and XX centuries kept in the museum are the basis for scientific researches and many exhibitions concerning the life of local people.

The museum officially opened on July 2nd, 1957 as Nikola Parapunov house-museum. Its main exposition shows the life of Colonel Nikola Parapunov and the led by him antifascist movement in the Pirin region. In 2000, with a decision of the City Council, the memorial museum was transformed into Historical museum – Razlog.

The temporary exhibitions today show the typical for the region “razlojko-chepiska” house with the set in its construction and furnishing values of the local mountain people for the sanctity of marriage and home, the need of harmony between man and nature, total denial of redundancy and alienation; the development of the town in XIX century and the fights of its people for freedom. In the lecture hall of the museum - for meetings, book presentations, lectures etc. – is the exhibition of the archaeological objects in the town and the municipality. Next to the museum is the monument of the citizens, killed in the Krustovdensko rebellion of Krapa neighborhood, as well as the marble fountain, made as a tribute for 1000 years Independence of the Bulgarian Orthodox Church.

View the embedded image gallery online at:
http://destinationrazlog.com/index.php/en/zabelejitelnosti-3/2014-03-07-10-32-44/item/216-historical-museum-razlog#sigProGalleriaa3276cc065
Tweet
More in this category: « Ethnographic–historical museum – Banya
back to top
List with onlain bookmakersGBETTING