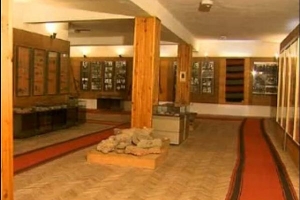 The oldest artifacts found so far in the Razlog valley are from the village of Eleshnitsa, which is 20 km from Razlog. Houses, religious buildings and ceramics from VI millennium BC are found here - this is the era of the early Neolithic - very important in the history of mankind; an era when Homo sapiens first began to cultivate plants, to domesticate animals. This was the time when agriculture and husbandry appear; homes are built for the first time; family appears as a social unit.

Researchers believe that the people, who settled this little village with a dozen houses and lived there for about a century, are immigrants from Mala Asia, moving along the Valley of Mesta River. As evidence they give a small ceramic figure of a jaguar - an animal that have never lived in our lands – back in time and nowadays. Valuable for the researchers are many small ceramic female figurines, evidence of the cult of the Great Mother Goddess - one of the most ancient human cults widespread in matriarchy. The finding in Eleshnitsa actually shows the way of spreading the Neolithic culture in Central and Western Europe - from Mala Asia to the valleys of Mesta, Struma, Maritsa and Vardar rivers.

The first museum exhibition in the village of Eleshnitsa was established in 1978 in the library, and has a profile archeology. Prerequisite for the establishment of the museum in Eleshnitsa was the discovery of the Neolithic settlement and the work of experts who reveal valuable materials from two villages of the early and late Neolithic.

In November 1994 with the help of experts from the historical museum in Blagoevgrad  the new exhibition was opened, it can be seen today - pottery, ethnography and documents about the history of the village. The museum has a valuable collection of archaeological objects, tools of stone and bone, anthropomorphic and zoomorphic figures, pottery found during archaeological excavations in 1983 - 1985 г.

Ethnographic funds contain materials from wood, metal, ceramics, and also photos and documents showing all aspects of the life from the late 19th century. Presented crafts are typical for the means of livelihood, home life, the typically for the region traditional costumes and ornaments.