The Turkish bath in the village of Banya 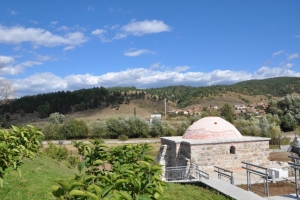 “A city is perfect only, when there is a bath in it” – said Abu Sir, one of the first Arabic historians. And indeed – making baths was so important in the past, that it was recommended if someone has a sin, to build a bath and his sin will be forgiven. Thus – with a donation of a wealthy Turkish family the Turkish bath in the village of Banya was built, it was known as “Murtina bath”. The bath is typical for the Ottoman public baths on the Balkans, built in the period 15-20 century. It is believed that it has been built in the 17th century because of the similar architecture with the Old Bulgarian bath.

The Turkish bath is built with 2 entrances because the Turks have a belief that one should go inside the bath with the left foot through the left door before taking a bath, and after that - went out through the right one. For the warm waters of the Turkish bath, they used “Blagata voda” (the Sweet water) with temperature of 54 degrees. The mineral water was mixed with the cold water from the river that directly flowed under the bath. Christians were not allowed in the bath.

During the restoration in 2012 some remains of a small building were found – it was built in 1907 for a changing room; the floor was made of  bricks from the dome. After the extension was built, the bath became paid. There was also a room used as a pub and a little store in the new building.

There is a legend about the Turkish bath, which says that in Banya lived a wealthy Turkish family - Murtazovi. During the Venetian-Turkish war (1714-1718) two brothers from the family took part in it. One of their fellows came back in Banya and brought a gift for the parents – a cannon ball, which the father angrily threw away, thinking that this present was kind of a joke. After the war, the brothers came back in Banya and asked their father if he got their present. The father pointed the dunghill – where the cannon ball lied. The brothers took it, disassembled it and golden coins felt out of it. He father gathered the money, knowing that during the war, they were looted, which is a sin. That is why he proposed to his sons to do some good with the money by building a new bath in the village; sure that Allah will not punish them. The sons agreed with the proposal and the bath was built with that money. In their honor, it was called “Murtina” bath.

The Turkish bath was used till the 50s of the 20th century and after its restoration in 2012, every tourist can feel the authentic atmosphere of the bath, visiting the richest of mineral springs village – Banya.

View the embedded image gallery online at:
http://destinationrazlog.com/index.php/en/zabelejitelnosti-3/arh-pametnici/item/200-the-turkish-bath-in-the-village-of-banya#sigProGalleriaa4dfddafa7
Tweet
More in this category: The Painted Church »
back to top
List with onlain bookmakersGBETTING