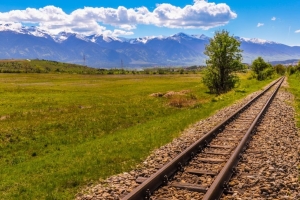 An unforgettable experience for everybody is the “Balkan alpine railway”. The tourists in Razlog don’t miss the opportunity to try the narrow-gauge railway and travel some kilometers to the next stop through scenic areas. The narrow-gauge railway Septemvri – Dobrinishte is the only operating railway of this type in Bulgaria with distance of 760mm between the rails. The distance of 125km between the beginning and the end stations can be travelled in about 5 hours.

The light rail goes from Septemvri (on the main road Sofia – Plovdiv) to Dobrinishte passing by Velingrad, Yakoruda, Razlog and Bansko and connecting the most western part of the Upper Thracian Plain with the Western Rhodopes, Rila and Pirin. Because of the special features of the track through the mountains, the narrow-gauge rail is also known as “The alpine railway of the Balkans”. The difficult terrain determines the low speed of the trains.The railway stop in “Avramovo”, situated at 1267m above sea level is the highest stations on the Balkans.

The railroad was built in several stages between 1921 and 1945. There are many artificial facilities – bridges, tunnels and spiral ascents. The deviation Pazardhik – Varvara village (16.6km) was dismantled in 2002.

View the embedded image gallery online at:
https://destinationrazlog.com/index.php/en/zabelejitelnosti-3/turizam/item/210-balkan-alpine-railway#sigProGalleria15168f1059
Tweet
More in this category: « Мoto-delta gliding Horseback riding in the mountains »
back to top
List with onlain bookmakersGBETTING